The Nintendo 64[a] (abbreviated as N64, stylized as NINTENDO64) is a home video game console developed and marketed by Nintendo.

The console is the successor to the Super Nintendo Entertainment System. It was first released on June 23, 1996 in Japan, on September 29, 1996 in North America, and March 1, 1997 in Europe and Australia.

It was the last major home console to use cartridges as its primary storage format until the Nintendo Switch in 2017.[8] As a fifth generation console, it competed primarily with the Sony PlayStation and the Sega Saturn. 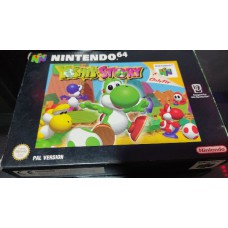 Complete in boxNote: game cartridge could have some yellow/scratch, it's old..